If you've visited the General Market Overview page or watched my Chart Notes page for a while you've seen the % of Stocks Above Their 50-Day Moving Averages indicator. 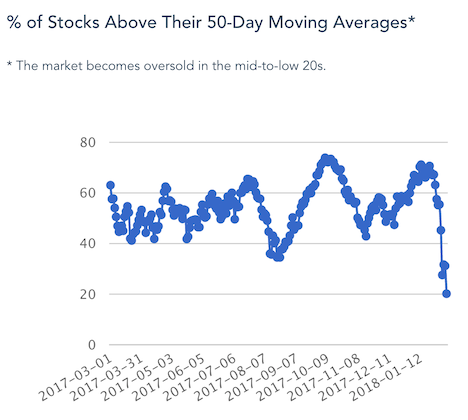 I love to use it as an oversold indicator during market selloffs.  I first learned of it in the early 2000's via Worden's software -- they have an indicator called T2108, which is the percentage of NYSE stocks above their 40-day moving averages.  When I built this site I wanted something similar, so I went with the indicator you see on the General Market Overview page.  The difference is that mine takes all stocks into account (not just NYSE stocks) and it uses the 50-day moving average.  But they tell the same story.  That is, once the percentage drops to or below 20, the market is oversold and is likely to stage a short term bounce in the near future.

An old stock bloging buddy, Chris, tweeted the following chart yesterday, which nicely illustrates this phenomenon. That shows a weekly S&P 500 chart plotted against the percentage of S&P 500 stocks above their 50-day moving averages.  (Click the image to view a larger version)

Chris noted that the indicator:

The dip around October 2009 shows that this isn't some magical indicator that guarantees THE BOTTOM has been put in.  (But it does show that you're likely to be wrong to make bearish bets with the indicator under 20 -- unless you're making very short term trades). Like, I said, I like to use it as a warning of a short-term bottom being near.  So I'll likely cover or tighten my stops on any short positions and maybe start a buy list when I see the indicator get near or below 20.

So I think these are great indicators to keep in your back pocket during "scary" times.  I don't like to use these type of indicators as overbought warnings because overbought seems to stay overbought for so long, especially in a bull market.  I do find them interesting as breadth indicators though.  I never like to see the market making new highs while the percentage of stocks above X moving average lags behind.